The VAIO Z Canvas is a high-end, convertible Windows 10 tablet built for creative professionals. It's expensive, but it has the build and performance to justify the cost.

The rumors of VAIO’s demise are greatly exaggerated. Following a selloff by Sony in 2014 to Japan Industrial Partners, VAIO is back with a high end convertible tablet made for creative professionals like photographers, artists, and architects running powerful software programs. Operating on Windows 10 Pro and including a host of interesting features, the VAIO Z Canvas costs a lot but has incredible power under the hood, if not weak battery life.

We reviewed the VAIO Z Canvas originally for NotebookReview, this is a condensed version of our findings.

The VAIO Z Canvas is an aesthetically pleasing slab of tech that sandwiches a powerful processor and capable graphics card between an aluminum alloy body and anti-shock, 6-sided reinforced glass. It looks and feels rugged, but we don’t suggest performing a drop test. It’s built with an LCD touchscreen display that’s more than a half-inch thick and weighs 3.5 pounds with the keyboard, 2.7 pounds without it.

The tablet has a 12.3-inch LCD WQXGA+ 2560 x 1704 IPS display that renders at 3:2 aspect ratio and displays 95 percent of the Adobe RGB color spectrum. It offers rich colors and crisp images. Screen brightness is exceptional, but its anti-glare screen is somewhat ineffective against bright light sources. The wide angle screen performs best when viewed straight on; at sharp angles, some clarity loss is evident.

A glossy border along the edges of the display makes handling without launching onscreen functions easy. There’s a front-facing 1MP camera on the top border and a capacitive Windows Start Menu launch button on the bottom border. Numerous ports are found on the left edge of the body. The right edge of the tablet is home to a power button, a volume rocker, and a mounting slot for the pen stylus that has a tendency to get in the way.

The VAIO Z Canvas has a unique kickstand design.

There’s a ventilation grille on the top edge of the tablet that’s bordered by a single button on either side. One button turns touchscreen functionality on and off. The other launches onscreen controls that allow for one-touch complex keyboard shortcuts. Two stereo speakers on the bottom edge of the tablet emit crisp, clear audio – however the speakers are not capable of reaching volumes that are equivalent to standard laptop speakers.

A fold-down kickstand on the back enables the display to stand upright and can be adjusted to different angles. It holds these positions well, even when pressure is applied on the display. An 8MP rear-facing camera capable of recording 1080p video at 24 fps is also found on the back side.

Numerous ports support a variety of connectivity options. These are found on the left edge of the display and include a headphone jack, AC power jack, two USB 3.0 ports (one for recharging), an SD card reader, a LAN (RJ45) Ethernet port, a mini DisplayPort, and HDMI output. Both mini DisplayPort and HDMI are 4K compatible. USB Type-C connectivity is not supported.

The VAIO Z Canvas’s keyboard is called “detachable” but this is a misnomer since it doesn’t connect physically to the tablet screen at all. It is instead entirely detached, connecting wirelessly to the display via radio (RF) instead of Bluetooth. The downside is that it can’t be used in traditional “on the lap” orientation.

The keyboard comes included with the purchase of the Z Canvas. It’s lightweight and battery-powered, adhering to the display magnetically when it’s placed on top of the screen in the closed position. The keyboard battery automatically charges through a small connecting nub when placed in this position. A switch turns the keyboard on, off, or disables the trackpad. The keyboard is full-size, as is the track pad, but it lacks a 10-key numeric pad.

The key travel is shallow, only about 1.35mm, but it’s crisp, with maximum snap. Unfortunately, it’s not backlit. 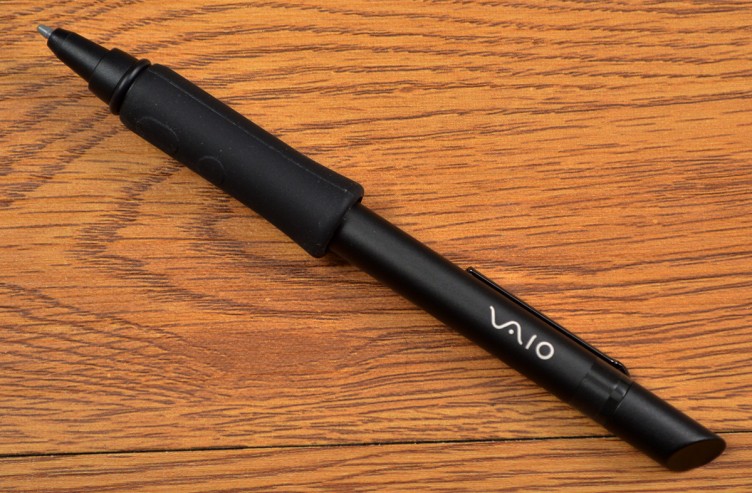 The VAIO Z Canvas ships with an N-Trig pen.

The VAIO Z Canvas comes with a battery powered N-Trig active digitizer stylus pen powered by a AAAA battery. It has 1,024 levels of pressure sensitivity. The lower tip of the stylus has a rubberized comfort grip that houses two function buttons – one for launching Windows OneNote, another for clipping. Tip sensitivity can be adjusted between Soft, Normal and Hard. Built-in screen palm rejection aids in preventing errors when using the tablet for writing or sketching.

The stylus is accurate but requires a certain amount of adjustment. When the pen tip presses against the glossy display, it doesn’t represent the feel of pen on paper but is instead slippery. It does well with correcting the jitters of a slowly-drawn line, though isn’t perfect. That said, it’s better than the Surface Pro 3 Pen.  The function buttons on the rubberized grip are easy to accidentally press while writing. Aside from this, it’s highly accurate and responsive once the users gets used to the action of the stylus.